The following documents reflect the work of groups of individuals selected for their expertise both in the relevant subjects and in interfaith work, who generously volunteered to contribute their thoughts and experience.

The G20 Interfaith Forum annually gathers religious leaders, communities, and faith-based organizations to consider questions on the global political agenda and raise issues of concern, reflecting that religious identities and affiliations can influence the ways in which people design, implement and respond to global policies. In 2020, the organizing partners- the International Dialogue Centre (KAICIID), the G20 Interfaith Forum Association, the United Nations Alliance of Civilizations (UNAOC), and the National Committee for Interfaith and Intercultural Dialogue in the Kingdom of Saudi Arabia (NCIID)- organized six regional consultations as a precursor to the global G20 Interfaith Forum in October. Their work comes alongside a series of continuing working groups that focus on priority issues on the G20 agendas.

These are intended to provide a source of analysis and inspiration for global recommendations to be explored at the October G20 Interfaith Forum. The Forum partners will then distil the proposals into a final document to be presented to the G20 Leaders as they prepare for their Summit in November. 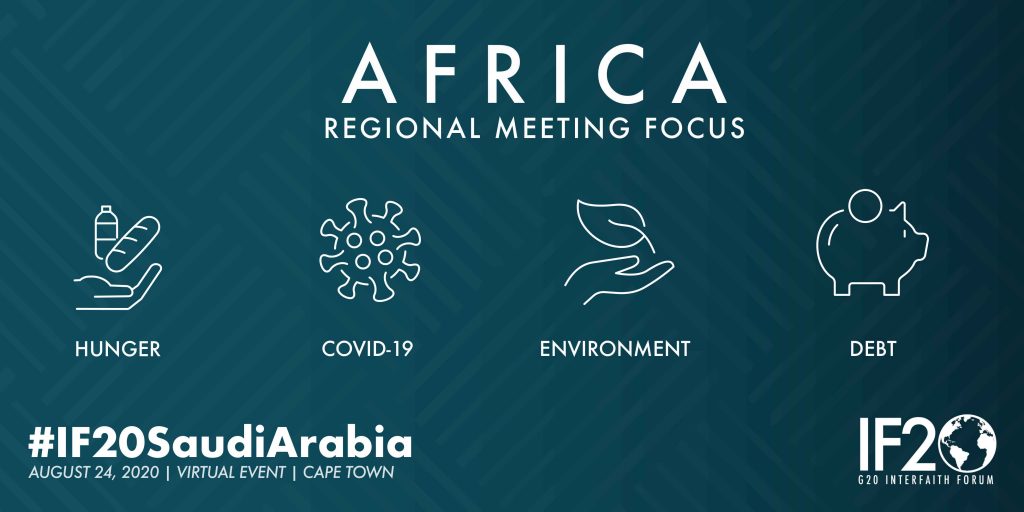 For decades, Faisal Bin Abdulrahman Bin Muaammar has promoted Inter-Religious tolerance, built intercultural understanding through local and international inter-community institutions and overseen knowledge-building initiatives. He is the Founder and Secretary of two organization focus on enhancing understanding and knowledge: the International Dialogue Centre (KAICIDD) in Vienna, and the King Abdulaziz Public Library (KAPL) in Riyadh. Previously, he oversaw the founding and stewardship of the King Abdulaziz Center for National Dialogue (KACND), the Kingdom of Saudi Arabia’s only institution dedicated to national dialogue. His senior positions in the Saudi Arabian administration have included Vice Minister of Education, Advisor to het Royal Court of then-Crown Prince Abdullah bin Abdulaziz Al Saud, and Deputy of the National Guard for Cultural and Educational Affairs.

W. Cole Durham, Jr. is emeritus professor of Law at the J. Reuben Clark Law School of Brigham Young University, where he held the Susa Young Gates University Professorship. He is also founding director of the Law School’s International Center for Law and Religion Studies (ICLRS). He has been heavily involved in comparative law scholarship, with a special emphasis on comparative constitutional law, and is known for his contributions to protecting religious freedoms.

Her Excellency, Dame Pauline Kedem Tallen hails from Shendam Local Government Area of Plateau State, Nigeria. She is a devout Christian and happily married with children. She studied at the University of Jos where she bagged a Bachelor of Science in Sociology in 1982 and later headed to Harvard University USA for a Programme in Strategic Public Sector Negotiations. She also attended John F. N. Kennedy School of Government, among others.

Dame Pauline has enjoyed a fulfilled life and career with a barrage of sterling achievements in various parlances of her interest, including but not limited to education, politics, administration, peace and development. From 1994 to 1996, Dame Pauline served as Commissioner in the Ministry of Social Development, Youth, Sports and Culture, and Commissioner in the Ministry of Healthall in her state of Plateau. In 1996, she was a member of the Plateau state Executive Council, and in 1999, a member of the Presidential Inauguration Committee of the People’s Democratic Party (PDP). Owing to her demonstration of clear and impactful vision that increased her relevance in the national political and development space, Dame Pauline served faithfully as Honourable Minister of State, Federal Ministry of Science and Technology, Federal Republic of Nigeria from 1999 to 2003, and in 2005, she served as Chairman Governing Board, Raw Materials Research and Development (RMRDC). In same year, 2005, she was decorated with the award of National Honors of the Officer of the Order of the Federal Republic (OFR), by His Excellency, President Olusegun Obasanjo GCFR as an official national recognition of her invaluable contribution to national development.

Dame Paulins’s political career continued to soar on wings of tremendous achievements, leading her to very deservingly serve as Deputy Governor of her state of Plateau from 2007 to 2011, after which she became the National Adviser of The National Campaign Women Council APC under the Chairperson of Mrs. Aisha Buhari, as well as Member Board of Trustees of the All Progressive Congress (APC), all in 2015. Dame Pauline is the CHAIRMAN (Governing Board) National Agency for Control of AIDS (NACA), a position she has innovatively and successfully manned from 2017 till date. She is the Proprietress,           First Private Nursery/Primary School Shendam, a school she established since 1982 in contribution to the response to the need for quality education. Dame Pauline has served in these positions amidst several other positions and community service works across different fields and works of life in immense contribution to the national and community developments with peculiar passion and excellence

Her Excellency, Dame Pauline Tallen has attended various Seminars and Conferences both at National and International levels in the fields of Education, Health, Politics, Science and Technology and Business Administration, across countries of Britain,  Canada, Singapore, Italy, U.S.A., Indonesia, Rome, Pakistan, Iran, Malaysia, France, Ethiopia, South Africa, Israel, Japan,  China, South Korea, Mozambique and Egypt. She has been a WorldAmbassadorofPeace, Inter-religious and International Federation for World Peace, since 2000.

John Onaiyekan has been the Archbishop of Abuja since 1994 and was named cardinal in November 2012. He was previously the president of the Christian Association of Nigeria, president of the Catholic Bishops’ Conference of Nigeria, and Bishop of Ilorin. He participated in the 2008 Madrid forum of the Alliance of Civilizations on the role of religious leaders in promoting security and in 2012 was Pax Christi International’s Peace Laureate. Born in Kogi State, Nigeria, Onaiyekan completed his religious studies in Rome in 1969 and was ordained as a priest later that year. He subsequently taught at St. Kizito’s College, Isanlu and became rector of St. Clement Junior Seminary in Lokoja in 1971; he earned his doctorate in 1976, afterwards becoming Vice Rector of Saints Peter & Paul in 1977.

Valerie Newsom Guarnieri Assistant Executive Director Valerie Newsom Guarnieri became Assistant Executive Director in January 2018. In this role, she brings together and oversees essential elements of WFP global operations, including emergency preparedness and response, programme and policy, nutrition and supply chain to ensure essential support to vulnerable, food insecure people around the world. Prior to this appointment, Ms Guarnieri served as WFP Regional Director for East and Central Africa providing supervision, strategic guidance and support for country operations throughout the region. Ms Guarnieri began her career with WFP in 2000 as Senior Policy Advisor and has since served as Deputy Country Director in Zimbabwe, Country Director and Representative in the Philippines and Director, Programme Division. In the latter role, she provided global leadership and support for the design and deployment of innovative, high quality programmes to address urgent hunger and nutrition needs. Prior to joining WFP, Ms Guarnieri served within the U.S. Government where she supported humanitarian and development actions which saved lives and helped create conditions for sustainable peace, with particular focus in Africa. An American national, Ms Guarnieri was born in Heidelberg, Germany. She holds a Master of Arts from the School of International Service of American University in Washington, D.C.

Hassan Ole Naado is the deputy secretary general of the Supreme Council of Kenya Muslims (SUPKEM). Ole Naado is the founding CEO of the Kenya Muslim Youth Alliance and the chief editor of the New Dawn publication. He has been involved in governance, prevention and countering violent extremism, national peacebuilding and conflict resolution, and professional consultancies. Prior to joining SUPKEM, Ole Naado worked at the Embassy of the Islamic Republic of Iran as the public relations officer and as the program officer under the National Civic Education Programme implemented by the Consortium for the Empowerment and Development of Marginalized Communities. He has consulted for the Global Centre on Cooperative Security, Institute of Security Studies in South Africa, and the Royal United Services Institute for Defence and Security Studies, UK-SRIVE, Horn of Africa programme. He also received a Chevening Fellowship.

Dr. Francis Kuria Kagema is the secretary general of the African Council of Religious Leaders-RfP and executive director of Inter-Religious Council of Kenya (IRCK), a position he has held since 2008. He previously served as programs director and head of the IRCK-RfP secretariat for a period of six years. Before joining the Inter-Religious Council of Kenya, Dr. Kuria worked as the national coordinator for the Small Business Network, an organization advocating for small and medium enterprises. He also worked as a financial analyst at the Nairobi Stock Exchange, and as a volunteer with St. John Ambulance Brigade, where he worked for 16 years, eventually retiring as assistant commissioner of training and operations in 1998. Dr. Kuria holds a degree in veterinary medicine and surgery, and is married with four children.

H.E. Dr. Martin Pascal Tine, Ambassador of the Republic of Senegal to the Holy See 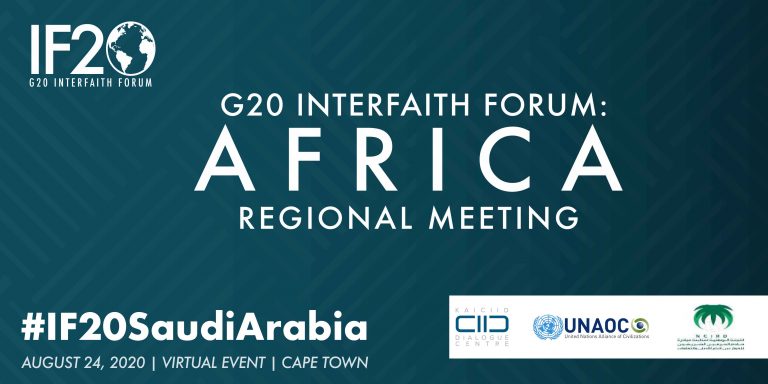