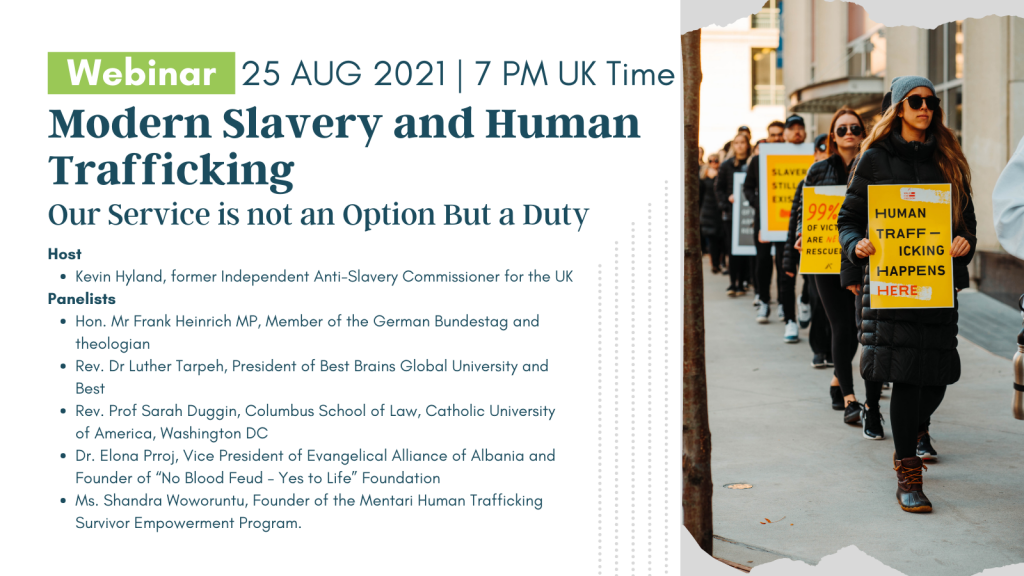 Kevin Hyland began the discussion by providing an overview of the human trafficking problem around the world and asking several thought-provoking questions to promote dialogue. He then invited each of the speakers to present their thoughts. Questions were taken at the end of each panelist’s prepared remarks.

“Estimates say that around the world 40M people are suffering from human trafficking, some of it in plain sight. But less than one percent of victims are identified, and perpetrators have a 99.8 percent chance of getting away with it. Forced labor and human trafficking provide various industries with $150B in profits every year. So, though we have standards for product quality, where are the standards for the treatment of the people involved in manufacturing? Why is this problem getting worse? How do we open people’s hearts and make policy about people instead of just commerce? How can we make prevention of this a duty instead of merely an option?”

Heinrich started by briefly sharing why social issues and human rights are such a central focus in his life. He spent much of his childhood in various countries behind the Iron Curtain, and he became very familiar with the distinct feeling of areas with freedom vs. areas without it. Starting as a social worker, then a Salvation Army officer, he eventually stumbled into politics, where he was confronted with the realities and statistics of human trafficking and sexual exploitation: In Germany, there are 1.2M transactions in the sex business every day, mostly “in the dark.”

Often when religious communities strive to combat these issues, they do it from a moral standpoint rather than one of human rights. However, he argued, “instead of approaching this from moral argumentation, we need to become involved and more deeply informed. It’s about the human dignity of women and children, whether it’s the sex trade or supply chains in business. The people in this business are rich and powerful. If somebody argues weakly and from a moral standpoint, they can be quickly disregarded and silenced.”

He called for laws that will actually enact change, saying that things must be worded as practicably as possible. To clearly define people’s responsibilities and hold them accountable, he suggested creating a system where manufacturers and supply chains have to qualify for a “green light” at each step of a product, and referenced Germany’s recent efforts to better regulate their supply chains. However, he said that the role of religious communities started at a more personal level.

“We can’t have a prophetic voice to the outside world until we’ve talked honestly within our own communities, starting with looking closely at the tea on our own table.”

Tarpeh focused his comments on the human trafficking and forced labor problems in Africa, referencing his own childhood experiences as his main motivation. Born in abject poverty, he was one of 27 children born to his father. When his father refused to let him go to school, his mother took him and left the village they lived in, losing all her resources in a divorce, then helped him walk three hours through the jungle each way to school. When she was killed in Liberia’s civil war, Tarpeh made a vow to use his education that she’d sacrificed so much for to give back.

On his return from university in Nigeria following the war, Tarpeh was surrounded by young people who’d lost everything. He and his wife took in 27 children. When he approached government institutions to get help in getting the children to school, however, he was flabbergasted to find that they had no interest in helping.

“Here in Africa, trafficking is huge because of poverty, corruption, and weak institutions. But even with the most vulnerable, our faith in God gives us the ability to see people for who they are. Some of the kids I took in have completed university. They have jobs. They’re family people. To solve this problem of human trafficking, we need to be the voice for the voiceless out there. We must use every platform that God has given us.”

Tarpeh offered the example of rubber plantations in Liberia, which routinely exploit the labor of young children with nearly zero repercussions. He said that he raises the issue of vulnerable children every morning and every evening on the radio, and he believes if religious communities choose to be vocal about the issue at every opportunity, eventually government leaders will hear and act as well.

Duggin approached the issue from the perspective of a parish priest, looking at people in the United States’ failure to see what is happening in the world. She said that most Americans have an idea of sex trafficking, though they don’t know what to do about it, but they’re failing to see their brothers and sisters in other trafficking situations. And even when they do make an effort to get information about the integrity of supply chains, they quickly throw up their hands, overwhelmed, and stop worrying about the problem.

“Christ saw those who were ‘invisible’ in His day, and we as people of faith have a sacred obligation to do the same. But it’s too easy to turn a blind eye to the suffering in our cities and our farms. It’s too easy to ignore the true human costs of the products we use every day. We don’t take the steps we need to figure out if the products we’re consuming are produced at a terrible human cost.”

She also emphasized the need for practical education on human trafficking for clergy and in sermons, training faith leaders to engage. Along that line, she offered three suggestions for people of faith: 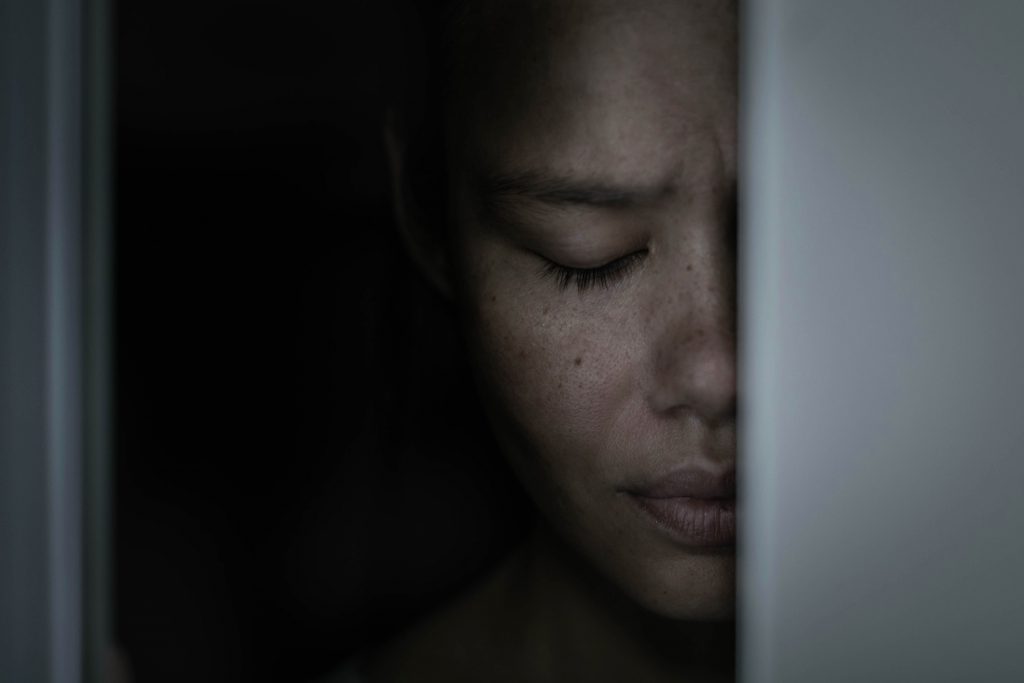 Projj began her comments by referencing an experience she had while attending the European Prayer Breakfast in Brussels, Belgium. A friend took her to a road where she met 32 girls who were trafficked and acting as prostitutes. Prroj was shocked to discover that 30 of the girls were Albanians. Though she’d known before that Albania was a source country for human trafficking, she was ashamed that she hadn’t known the reality and extent of the issue.

She said that girls in Albania are often subject to violence from their fathers and treated like second-class citizens or boarders in their own homes. Families invest more in sons than in daughters, as sons receive the inheritance. So, often, girls will go with the first man who gives them attention as a way out because of violence and gender inequality and poor education.

Thus far, Prroj’s foundation has been able to mediate with several fathers and encourage them to support their daughters enough to at least get them through high school.  Though the results have not been massive, she finds them encouraging.

“We’re called to save one life at a time with what we have in our hands today. It’s good for our work and results to be massive, but it starts small. We must prioritize prevention over punishment, because it’s much easier to prevent than to rehabilitate. It is better to be active than reactive.”

In addition, she talked about the shame and stigmatization victims face in telling the truth in Albania, and called for leaders to remember the alarming growth of social media recruitment as they create policy.

When Woworuntu was a young woman, she lost her job as a banker during political upheavals and decided to take advantage of the opportunity to come to the U.S., looking for a better life. Upon arrival, she was kidnapped and exploited as a prostitute until she was able to escape from a second-story window.

As a Catholic with faith in God, she went to many churches seeking help, but they didn’t identify her as a victim. They called her a prostitute and refused to help.

“We live on the same earth. We breathe the same air. We have the same rights as human beings. We have to see victims and survivors not only with our eyes and our ears, but with our hearts. We must love them as God loves them.”

“Without identifying root causes and the patterns of the recruitment itself, we will fail.”

Hyland brought the event to an end by inviting Tarpeh, who does not live in a G20 member country, to make a comment for wealthy G20 nation leaders:

“I did not choose to live in this part of the world. I was born here by divine arrangement. Had my mother not fought hard for me, I wouldn’t be doing what I am today. You have to be the voice for us, because our leaders do not have the moral ability to focus on the vulnerable. Tie your aid to ensuring that the vulnerable will be taken care of—not just throwing money at African leaders who are very corrupt.”

Hyland concluded by saying that as the G20 controls 85 percent of the world’s economy, it can change the world if it decides to. And it needs to bring accountability to markets in pushing down and preventing exploitation.

After thanking attendees and participants, he invited everyone to stay tuned for the outcomes of the next session on human trafficking, which will take place at the G20 Interfaith Forum in Italy and will use the above points to influence and inform policy recommendations pushed to the G20 leaders.