Made in the Image of God: The Role of Sacred Texts in Helping or Hindering Gender Equality

On Tuesday, August  17th, the G20 Interfaith Forum held its third webinar organized by its Working Group on Gender Equality in preparation for the annual G20 Interfaith Forum meetings in Bologna, Italy this September. The event was co-sponsored by the International Academy for Multicultural Cooperation (IAMC); the European Centre for Religious Studies (Eucres); A Common Word Among the Youth (ACWAY); and the Freedom Business Alliance. Panelists included Dr. Azza Karam, Secretary-General of Religions for Peace; His Eminence Metropolitan Emmanuel, Metropolitan Elder of Chalcedon and Board of Directors member at KAICIID;Ms.  Sharon Rosen, Global Director of Religious Engagement at Search for Common Ground; Ms. Audrey Kitagawa, President of the International Academy for Multicultural Cooperation; Sadhvi Bhagawati Saraswatiji, Secretary-General of the Global Interfaith WASH Alliance and President of the Divine Shakti Foundation; and Ms. Rachel Rose Nelson, Executive Director of the Freedom Business Alliance. Dr. Elizabeta Kitanovic, Executive Secretary for Human Rights at CEC, moderated the discussion. 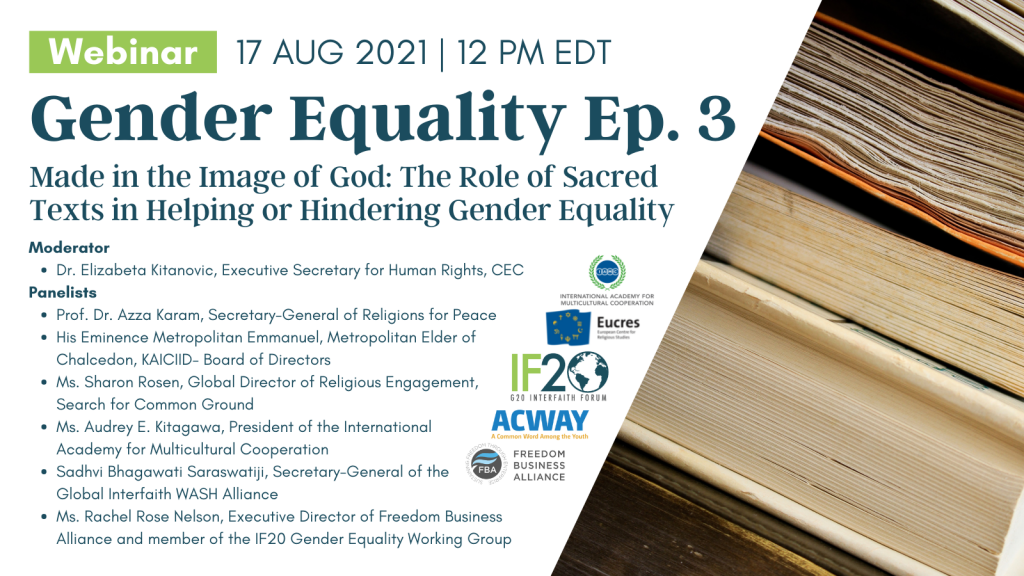 Elizabeta Kitanovic began the webinar by welcoming all participants and attendees and introducing the topic of discussion.

“There is a fundamental theological belief, supported by the text of Genesis in Jewish, Muslim, and Christian scripture, that females and males are both created in the image of God. Yet very conservative theological views on women, along with certain religious dogmas in each of these religious traditions, undermine women’s rights—violating this core theological teaching. Could these views regarding women’s subordination to men be a root cause of today’s gender inequalities? And if so, can a return to this scriptural principle help?”

Each panelist was given seven minutes to share their thoughts on the topic, coming from the perspective of various religious and academic traditions.

Karam began her thoughts by emphasizing that she was not speaking for the Islamic tradition as a whole, as she is not a religious scholar, but as a human rights advocate and a woman of faith. She focused on three thoughts:

Metropolitan Emmanuel strove, through his comments, to interpret Genesis 1:27 from the Orthodox theology and to readdress common damaging theological arguments which have been employed throughout the ages against women.

“Rather than upholding an obsession with returning to the garden, we should be looking forward together to the New Jerusalem. We can no longer afford to carry forward old ‘theology’ that marginalizes the participation of half the church and prevents people from fulfilling their full potential as children of God.”

Rosen focused her thoughts on how religion and culture influence one another, referencing the Bible through a Jewish lens. She said that religion both reflects and influences society and culture—and that eternal truths found in holy texts are the source of many of the values by which we live on this planet whether we practice religion or not. These eternal truths have been handed down to us and turned into Jewish law through the prism of male interpretation by men who have been in power over millennia, resulting in some of these laws discriminating against women. Gender equality is held back because of this power structure and because there is a tremendous fear that change will destroy the lifestyles and societies that both men and women hold dear. Though it is true that gender equality can harm traditional family structures, it can’t be stopped indefinitely.

She referenced examples of strong women in scripture: God tells Abraham to listen to his wife Sarah and do what she says; Rebecca leaves her family and follows the courage of her convictions to marry Isaac; the Egyptian midwives disobey Pharaoh and save the male Jewish children they are ordered to kill; and the five Zelophehad sisters petition Moses to inherit the property of their dead father and have their wish granted.

“There are wonderful examples of wise and powerful women in scripture. But there is no glossing over the fact that there are differences in the status of men and women, and there are clear discriminatory laws in Orthodox Judaism. To have religiously knowledgeable women challenge male leaders through discussion of the texts themselves? That is already happening and will bring the change we want to see.”

Kitagawa, though she was educated at Christian schools and identifies with the teachings of Paramahansa Sri Ramakrishna, elected to focus her thoughts on the attitudes and traditions of the Buddhist faith tradition she grew up in.

During his lifetime, the Buddha expounded over 85,000 sutras—which spawned many different schools and practices across geography and time. She said that though most female Buddhist deities are described with reverence and in positive terms,  Buddhist clerical discourses as a whole can be relentlessly misogynistic. Generally, women are seen as polluted because of menstruation, sexual intercourse and childbirth. Being born as a woman signifies improper conduct in a past life, and women must be re-born as a man in order to attain full enlightenment and Buddhahood.

However, according to Nichiren, a Buddhist priest who lived in Japan during the Kamakura era, the Lotus Sutra abolishes the inequality of women and allows them to achieve enlightenment. In fact, the male Boddhisatva Avalokiteshvara, who hears the cries of the world in the Lotus Sutra, is often worshipped in female form in Asia. Kitagawa lauded the visionary leadership of those like Nichiren and Paramahansa Sri Ramakrishna, and said that today’s leaders can actualize the Buddhist teachings of not causing harm or doing violence to others, especially towards women, who represent half of the world’s population.

“Citing Toshie Kurihara who said, ‘To dedicate oneself to Buddhism means more than simply studying the words of the sacred texts. It means to interpret and reinterpret Buddhism as a philosophy against the context of the present era in which we live, in order to revive its original spirit and give it new and relevant meaning,’ this reinterpretation of texts and beliefs through a contemporary lens will help us reach our humanitarian goals that we are addressing today, which is gender equality.”

Sadhviji expressed her great honor to speak from the Hindu perspective, and focused on the power and respect given to women in Hindu scripture. She said Hindu scripture is filled with ardent injunctions to respect, protect, and even worship women and girls in all of their forms. In fact, women played an essential role in compiling the scriptures themselves.

She referenced places in scripture where parents are told to gift their daughters with intellectuality and knowledge before marriage, where women are told to be strong and powerful like a rock, and where it is said that God is happy where women are respected. In Hindu prayers, the woman’s name and the female counterpart typically come first. There are large Hindu holidays dedicated to the worship of the Mother Goddess in a variety of manifestations. Religious leaders need to harness the power of these ardent devotional beliefs, occasions, and holidays to remind the people of the holiness of the women in their lives, and that the Mother Goddess they are worshipping in their temples actually LIVES in their homes in the form of their mothers, wives, sisters and daughters.

“That chasm between that which is in scripture and that which is lived in life is far too wide and far too deep, and as leaders our responsibility is to bridge that gap. That respect and reverence for the Mother Goddess in all Her forms needs to make its way into daily life.”

Nelson focused her comments on her experiences as a businesswoman and a woman of faith, leading the Freedom Business Alliance to combat human trafficking. She said that over 80% of people (mostly women) rescued from modern slavery are re-trafficked because they don’t have reliable employment and economic security. Though physical freedom is the first step, it isn’t a permanent solution, as economic vulnerability is a central root cause.

Nelson was a businesswoman before she was a Christian, so when she began her seminary education, she was fascinated by the story and traits of the “wife of noble character” in the book of Proverbs. This woman was lifted up as an ideal—but Nelson discovered that her roles as wife and mother were always emphasized over her business acumen. Through her studies, she found traces of the same language used to describe the wife of noble character in other places in the scriptures—looking at the story of Ruth with particular interest. To her, the story of Ruth and Boaz is less of a love story and more of a case for women’s economic empowerment, where a widow, orphan, and foreigner—someone who would have been at the bottom of the social hierarchy of her day—receives economic opportunity and protection offered by God’s laws of love and justice, through which she is able to secure her family’s future.

As the webinar concluded, no time was left for questions from the audience, so Kitanovic thanked all participants and encouraged attendees to submit their questions in the chat for further consideration in future meetings.