On Tuesday, July 27th, the G20 Interfaith Forum held its second webinar organized by its Working Group on Gender Equality in preparation for the annual G20 Interfaith Forum meetings in Bologna, Italy this September. The event was co-sponsored by the International Academy for Multicultural Cooperation (IAMC); the European Centre for Religious Studies (Eucres); A Common Word Among the Youth (ACWAY); and the Freedom Business Alliance. Panelists included Audrey E. Kitagawa, President/Founder of the International Academy for Multicultural Cooperation, Former Advisor to the Office of the Special Representative of the Secretary General for Children and Armed Conflict at the United Nations; Fatiha Serour, Co-founder of Justice Impact Lab, member of the Africa Group of Justice & Accountability; and Virginia Manzitti, Head of the Gender Team in the Directorate General for International Partnerships of the European Commission. 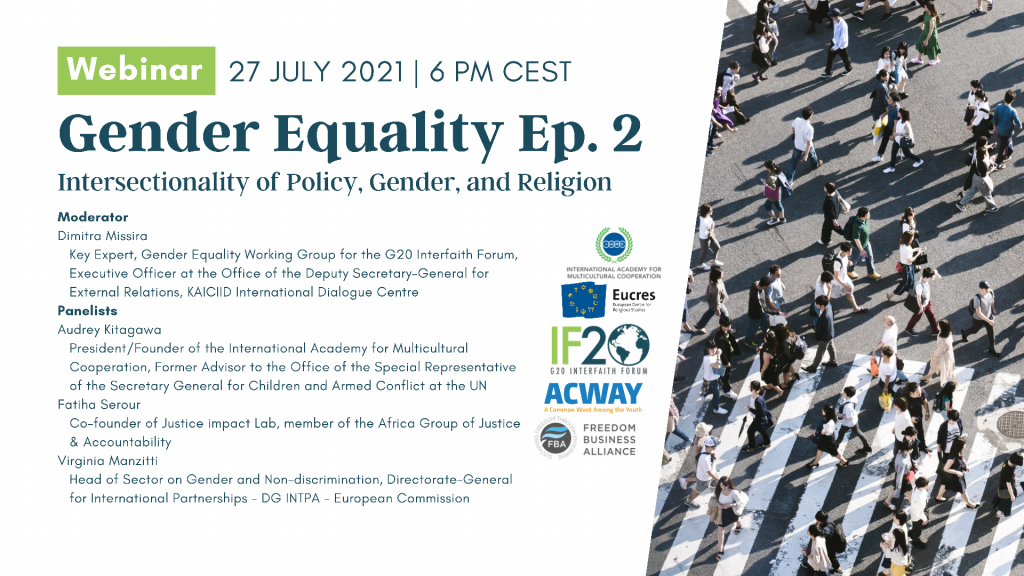 Dimitra Missira, Key Expert of the Gender Equality Working Group for the G20 Interfaith Forum, opened the webinar by welcoming all participants and attendees and emphasizing the importance of the discussion topic, which was the intersectionality of policy, gender, and religion.

“Even though the past decades have given rise to new global politics of gender equality and we have seen significant increases in women’s representation at different levels, gender divisions of power have not relented. Forty years after the adoption of the convention on the elimination of all forms of discrimination against women, we witness that women’s rights are being eroded…The focus of this event is on women, but more than the focus on women is the celebration of their voices and their power through a women dominated panel.”

The panel was organized as a Q&A, with speakers building the conversation around a series of questions asked by Missira.

Within your context of work, how have systems, experiences of discrimination, and intersectional relationships changed over time? How effectively are gender equality instruments adhered in your context?

Kitagawa began by stating the importance of intersectionality as we work to more fully understand the compounding nature of gender equality issues. She clarified that “these issues do not arise in isolation but are in fact deeply connected to each other.” Although she recognized the improvement of awareness and creation of legal instruments and other tools that value women’s recognition and participation, she stated that there is still much work to be done.

“With respect to the United States, it is really the only developed country to have signed CEDAW[1] but not ratified it. Also, within the United States it’s probably the only industrialized country without paid family medical leave. In a report by the World Economic Forum on the 2020 global gender gap, it was evaluated that out of 153 countries on progress towards equality in terms of education, health, economic opportunity, and political empowerment, the US is in a disappointing 53rd place.”

Kitagawa mentioned that this is partly due to the fact that the United States gender instruments are “not properly in place to support women and girls, including with regard to sexual violence.”

Serour discussed gender inequality in the African region specifically, highlighting that the intersectionality of gender equality, policy, and religion must be associated with women’s rights as a basic human right. She explained that in North Africa there are two things slowing progress:

However, in countries such as Nigeria, Morocco, and Tunisia, although there were reservations about certain articles in CEDAW, there has been good progress after implementation.

Overall, she stated that in Africa there is a “mixed picture” regarding gender equality.

“The test in the pudding is in the eating, in other words, we have a lot of policies, we have a lot of solutions, etc., etc., but implementation itself is the biggest issue. This is either because of social resistance, lack of political will, certain types of interpretation of religious texts, and broadly, the limited resources made available for gender equality to progress. So, progress? Yes. But still much more to do on the continent.”

Manzitti reported on the new gender action plan adopted by the EU External Action Service. This policy recognizes intersectionality as a main principle and also religion as a prominent factor. EU External Action’s new core priorities of gender equality and women empowerment were some of the driving forces for the new plan that affects their work all over the globe.

Encouraging people to lead by example, the policy is making a significant impact, with much more gender mainstreaming than existed before in the external countries. 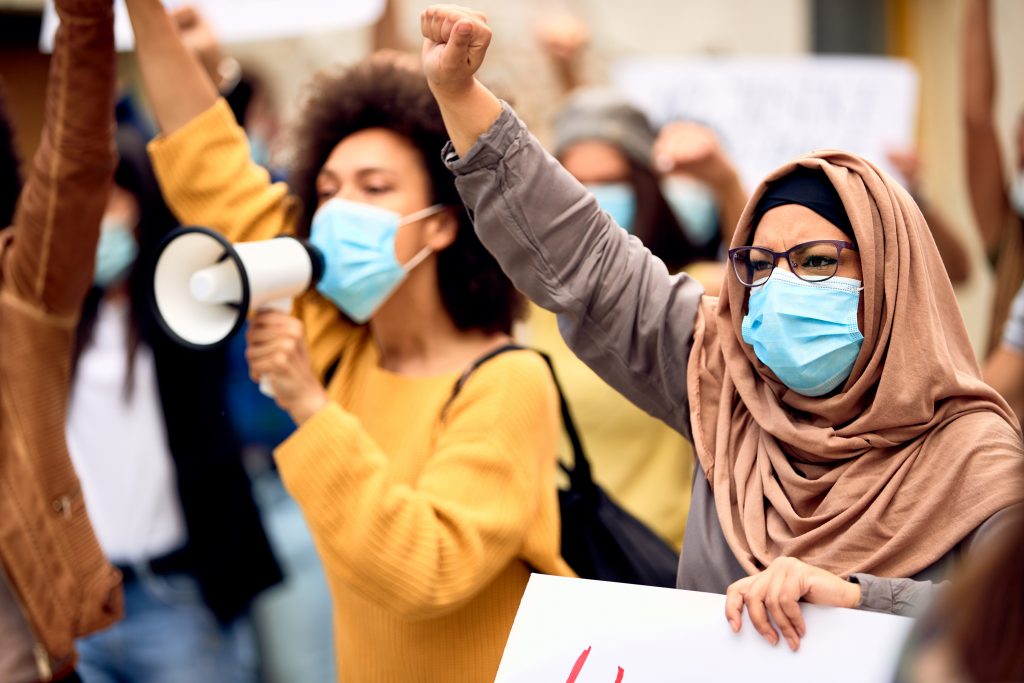 How can religious actors and faith-based and secular organizations contribute on gender equality issues? What challenges have you encountered in your work so far?

Kitagawa called on all religious and secular actors and advocates in every part of society to promote the protection of women and girls. Some of her specific direction includes the following:

Kitagawa also touched on her own challenges with traveling to sacred religious sites. In a few places she was actually cut off from the areas because she was a woman and therefore deemed “unclean” or “impure.” This even happened when the entire temple was dedicated to a goddess.

In the context of religious text, Serour stressed that often times the explanation of what the text means is created by male-dominated religious leaders. Consciously or unconsciously, that will affect how they perceive the text.

“We women are born and will die equal and should live equal, that is number one, and as such we are entitled to a share of political power as well as public space.”

One of her suggestions was working with religious leaders to come up with an “adaptation” of text explanations. Not to change the text, but to look at it “within the modern context where men and women are both playing a strong, important, critical, public role.”

Outside of religious text, she believes the work of gender equality will be more effective as a whole if religious leaders, secular organizations, and feminists come together and create a respectful dialogue.

“In many countries you cannot walk development, talk development if you ignore religion. Religion is everywhere where we work. But how to do it?”

Manzitti emphasized these guidelines when engaging with faith-based actors:

What combination of policies, practices, laws, or conditions need to be in place to create an enabling environment for women empowerment with transformative effects for societies and gender equality politics from the intersectional perspective you have presented today?

Kitagawa advised that we must change society’s patriarchal attitudes, promote the benefit of gender equality in all realms of society, and create national laws and policies that align with international humanitarian frameworks, such as criminalizing domestic violence, protecting victims of trafficking, and implementing measures to protect women from sexual violence.

“We can’t marginalize women, who are half of the world’s population, and think that we can make meaningful progress in addressing our global challenges without them. Women are the powerful agents of transformation for the 21st century, and it is time that we acknowledge that fact.”

Kitagawa also stressed that religion does not hold a monopoly on patriarchal views, and that the individual is also responsible to make “positive changes here and now.” Each person must work to understand power dynamics and how when used negatively, they can create “marginalization and oppression”, and when used positively, they can create “a self-empowerment and wholesomeness.”

Serour pushed the importance of communication, nurtured dialogue, and explaining what CEDAW means in different contexts.

“If we want to create an enabling environment, stakeholders need to come together and share the same vision and approach to gender equality. Until then we will still be fighting about who does and who doesn’t do it.”

Manzitti pushed introspection, consciousness, and self-discovery. She expressed an optimistic perspective and highlighted a “readiness to change in the air.” She also mentioned Spotlight and their comprehensive pillars towards gender equality and talked further on working with religious actors.

“It’s important to engage, but within a comprehensive approach, within a theory of change. It’s not enough to do a ‘once-all’ action. You need long-term engagement. You need to start from opening a conversation and leaving the space for religious actors to feel they are expected, that they are not instrumentalized, that they have space to think over it and find their own way and negotiate in their own constituency.”

She ended by stating “religion is moving at high speeds in all directions…nothing is fixed these days. Time for reflection and action is essential.”

In conclusion, Missira thanked the panelists for their input and insights. Concluded with the positive message that traditional (cultural and religious) values can coexist and adapt by only looking at this diverse panel and reminded us about the need to move towards a rights-based approach. Encouraged everyone to continue to follow the work of the Gender Equality Working Group in coming weeks.