On Wednesday, May 8th, the G20 Interfaith Forum held its fourth webinar of 2022, organized by its Anti-Racism Initiative and co-sponsored by the International Academy for Multicultural Cooperation and the Peres Academic Center Law School. Panelists included Yuli-Yoel Edelstein, Member of the Israeli Knesset and former Speaker of the Knesset and member of the cabinet; Natan Sharansky, Chair of the Institute for the Study of Global Antisemitism and Policy (ISGAP) and recipient of the Congressional Medal of Honor and Presidential Medal of Freedom; and Dr. Peter Petkoff, Senior Law Lecturer at the Brunel Law School and Managing Editor of the Oxford Journal of Law and Religion. Asher Maoz, Founding Dean of the Peres Academic Center Law School, moderated the discussion. View the video recording of the webinar here. 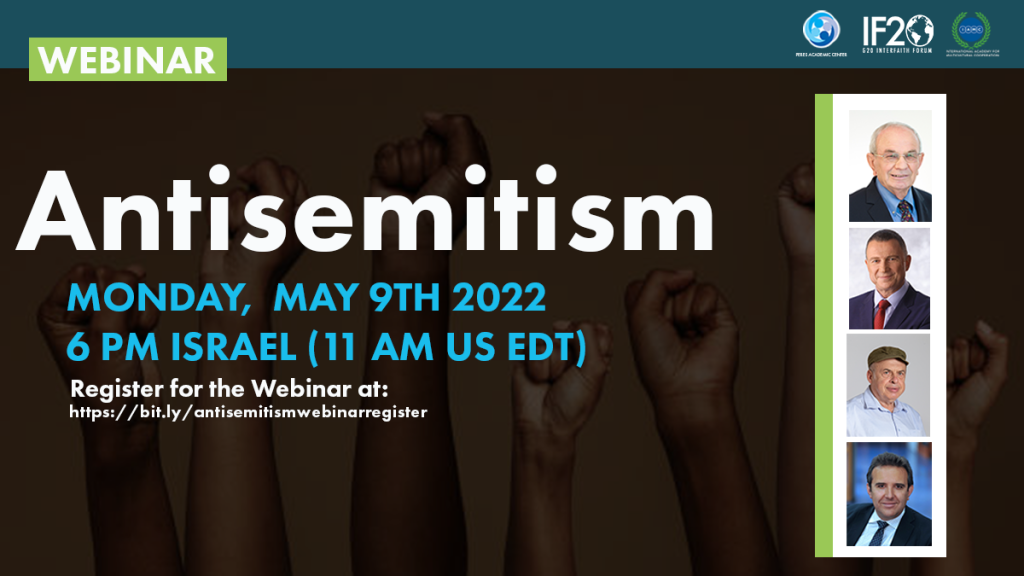 Audrey Kitagawa, Chair of the IF20 Anti-Racism Initiative, began the event by welcoming all speakers and attendees, then inviting Asher Maoz, the discussion’s moderator, to introduce the topic.

Maoz framed the discussion’s subject—Antisemitism—as an ancient and ongoing problem, using the ongoing COVID-19 pandemic as an example. He said Coronavirus is also being referred to by some as “Judeovirus,” hearkening back to the Black Death, where Jews were accused of both spreading the plague and profiting from it.

“How old is Antisemitism? As old as Pharaoh ordering the midwives to kill all the male children? Or as old as the plan to exterminate the Jews that Queen Esther stopped? That plan almost worked during World War II. And though we hoped the horrors of the Holocaust would be the end of Antisemitism, that’s been far from the case.”

Maoz then introduced each of the speakers and invited them to offer their comments.

Sharansky focused his comments on his experience as a Jew being born in Ukraine and living in Russia. He said there was a prejudice that Jews weren’t a loyal part of the population, and every time there was a complaint against Israel, Jews in Russia had to expect an increase in discrimination—possibly being fired from their jobs or worse.

He spent nine years in a Russian gulag as a Prisoner of Zion, and when the Soviet Union pulled apart and he was finally freed, he was able to join his people in Israel.

Sharansky said his personal experiences had already made him a strong advocate against Antisemitism, but the UN Durban Conference took things to the next level for him. He said the conference, which was purportedly against racism, quickly turned into a conference against Israel. Criticism of Israel turned into attacks on Jews, but those at the conference denied that it was Antisemitism.

After that experience, Sharansky said he decided to dive into studying where, exactly, valid criticism of Israel as a nation becomes Antisemitism and a double standard.

“When we see intellectuals from the West coming to Israel, seeing the refugee camps of Palestinians, and comparing them to Auschwitz? When they say that Apartheid today is happening in Israel? That’s demonization. Israel is singled out as the only democracy in the Middle East that’s the subject of sanctions. The standard of dealing with it is so different than the standard of dealing with other countries.

Edelstein centered his comments of the state of Antisemitism in the world today and in recent history, which he has done major research on in his role in the Israeli Knesset.

“There have been hopes that Antisemitism is part of a certain ideology or a certain period of history, but that isn’t true. It isn’t constrained to just the Ancient World. No matter what the situation is, the reasons will be there.”

He said modern Antisemitism was rampant surrounding the Gaza protests, where many just substituted the word “Israeli” for “Jew” and their hate speech was condoned. He also referenced the economic crisis, where blame quickly connected to Jews ruling the world, possessing all the money, controlling the banks, causing world hunger, and more.

However, he said that the situation is hopeful, because mainstream politicians and media worldwide aren’t willing to be openly Antisemitic. At least on the surface of things, no one wants to be labeled as an Antisemite, which helps direct speech in more positive ways.

“Keep in mind that like COVID, we can’t get to a complete zero. But our task is to always keep Antisemitism low—if all countries want to remain vibrant democracies, we must make sure of that.”

Petkoff focused his remarks on current approaches to combatting Antisemitism, and why he believes they are incomplete. He said the world thinks of different forms of hate in a fragmented way—as Christianophobia, Islamophobia, Antisemitism, and more.

He said he’s observed with great concern the resurgence of Antisemitism, particularly in Europe with its strong restrictions against hatred and Holocaust denial—and that he believes very little is happening to change hearts and minds on the ground due to the fact that everything has been made overly compartmentalized. The weaponizing of this fragmentation in Ukraine and the toothlessness of interfaith leaders in addressing it exemplifies this problem.

As an example of a more holistic approach to the problem, Petkoff referenced the efforts of the Bulgarian Orthodox Church to save Jews in Bulgaria during the Holocaust.

“Antisemitism is often packaged unhelpfully as a religious problem instead of an existential crisis for us all. It’s part of a systemic moral failure. It’s a microcosm of phobias that continue to degenerate to hatred.

“Without engaging with Antisemitism in a deeper way, we risk accomplishing nothing but surface-level box-checking. It isn’t a Jewish problem only, but an existential problem for all of us, and we cannot address it by fragmenting it.” 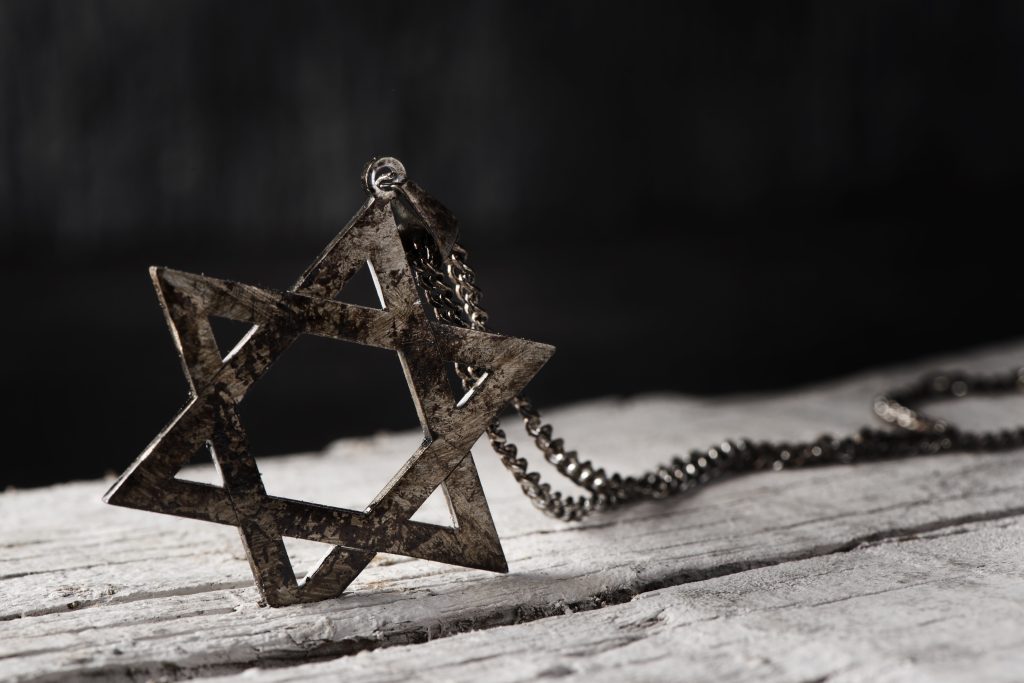 Panelists were then asked to address several questions from the audience, which were submitted via the chat.

Do you have any comments on the situation of Jews in Ukraine right now?

Natan Sharansky: The situation of Jews in Ukraine is tragic, but Jews in Russia are facing larger problems. It’s not accidental that there’s a big increase in immigration from Russia in general. I believe in the next few months, just as many Jews will come to Israel from Russia as from Ukraine.

Yuli-Yoel Edelstein: This war may be the first time since WWI that Jews find themselves fighting each other in different armies for different countries. Though the situation of the Jewish community in Ukraine is tragic,  it may be easier for the Jews than others because they have the State of Israel to go to.

Peter Petkoff: The war in Ukraine, with Russian propaganda trying to undermine the legitimacy of the Ukrainian government and appeasing different faith communities in its arguments, should be an important wake-up call. Unless we come up with consolidated voices as a counter-narrative for propaganda, we aren’t just letting down the Jewish community, but all people.

How would you regard the settlements of Israel on the West Bank without reference to Apartheid?

Yuli-Yoel Edelstein: How can one possibly see this as a form of Apartheid? I visited South Africa many times, during Apartheid and since. This is a political discussion over disputed territories. There is no common denominator between Apartheid and the situation between Israel and Samaria.

Peter Petkoff: As an outsider who’s very interested in Israeli politics, I feel very uncomfortable when terms from other regimes are used to describe the situation in Israel. Apartheid was a formal political arrangement. The situation on the ground in Israel is much more complex—determined by different rules. Using the word “Apartheid” is also a conversation stopper that discourages dialogue, much in the same way that some say the fear of potential Antisemitism has a chilling effect on dialogue surrounding Israel’s politics.

At the close of the meeting, each speaker offered concluding remarks, focusing on the importance of everyone fighting Antisemitism—finding common patterns and addressing hatred as a whole instead of regarding it as merely the problem of the group that is under attack.

Maoz then, after thanking all panelists and audience members for their participation, quoted the iconic prose “First they came” by Martin Niemöller, saying that if we don’t learn from history, we’ll repeat the mistakes of history.

“First they came for the socialists, and I did not speak out—
Because I was not a socialist.

Then they came for the Jews, and I did not speak out—
Because I was not a Jew.

Then they came for me—and there was no one left to speak for me.”