A discussion with first nation and indigenous leaders

On Monday, March 29, the G20 Interfaith Forum held a first webinar organized by its Anti-Racism Initiative. Panelists included Leah Gazan of the Canadian Parliament (Lakota Nation); Professor Michalyn Steele of Brigham Young University Law School (Seneca Nation); Romeo Saganash, Quebec’s first Indigenous Member of Parliament (Cree); and Ja:no’s Bowen, Seneca Language Department Director for the Allegany Territory (Seneca Nation). The event highlighted the critical issues that face leaders and communities at every level in countering the scourge of racism. In focusing on the North American legacies and present, the harsh realities of discrimination and the courage of those who face it, the speakers pointed towards responsibilities and possible actions, thus foreshadowing analytic and policy directions for the G20 Interfaith Forum that will be held in Bologna, Italy, September 12-14, 2021. 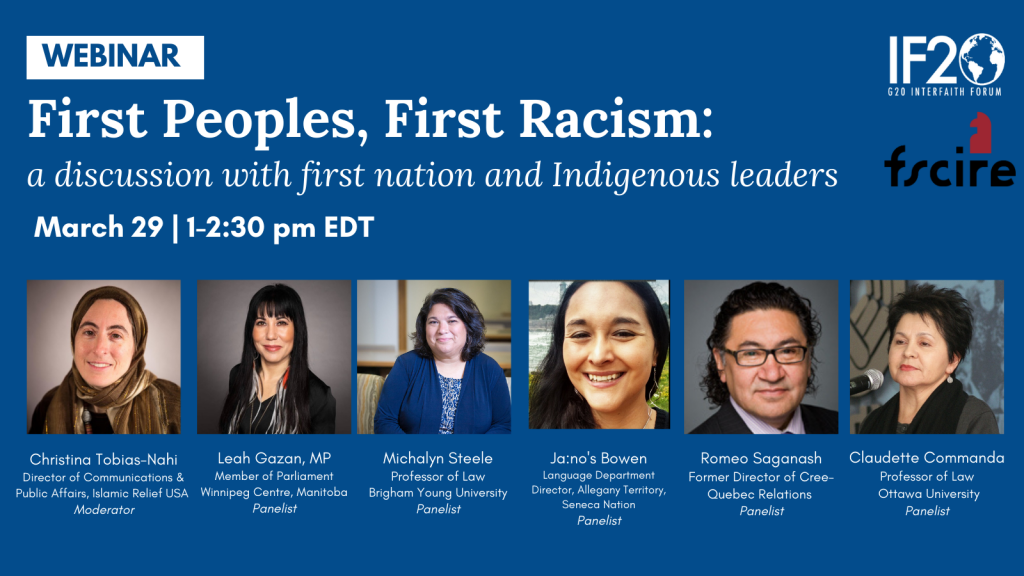 Ganoune Diop, who leads the IF20 Anti-Racism Initiative, said the issue of racism among indigenous peoples could not be neglected, as “it is a place of essential reconciliation and restoration for the healing of our world,” in line with the 2021 G20 Interfaith Forum theme, “A Time to Heal.”

Christina Tobias-Nahi of Islamic Relief acted as moderator and set the scene for the panelists’ comments by introducing the issue. While the Black Lives Matter movement has opened our eyes to blatant racism in this era, Tobias-Nahi said, there were other communities who came before—indigenous communities—who experienced racism on a scale that often led to full-on erasure of their culture and language:

After a blessing in both Seneca and English given by Ja:no’s Bowen to guide the proceedings, each panelist shared their thoughts.

Leah Gazan focused her comments on the power of heritage and “blood memory” to strengthen the resiliency of indigenous peoples. She detailed the racism and genocides experienced by both sides of her family—Holocaust survivors and indigenous Lakotas—and explained that she was a descendant of the famous Sitting Bull.

I come from a line of people who, despite all attempts to erase our existence, are still here. We still rise. We are still on the front lines, defending our lands and our indigenous rights. … Racism is alive and well today. There will never be reconciliation in the absence of justice. We have to look at the structures that perpetuate this.

Romeo Saganash told the story of how he was born in a tent and raised in the forests of Quebec for the first seven years of his life, speaking only Cree. At age seven, he was taken from his family, separated from his siblings, and placed in a residential school, where he spent the next decade in “political, cultural, and linguistic incarceration.”

Upon his release, he said he promised himself two things: to return to the land, and to put effort into reconciling with the people that put him away. The second goal turned into a lifetime effort, leading Saganash to earn a law degree, be elected to Canadian Parliament, and spend 23 years assisting with the creation of the UN Declaration on the Rights of Indigenous Peoples.

Michalyn Steele detailed various elements of “cultural genocide”: destruction of language, disrespect of sacred sites, broken treaties over land, and distorted attitudes that freeze indigenous people in a historical era. She explained that law and policy are one instrument through which reconciliation can be made, but that true, communicative good will—and not just misguided benevolence—is also essential:

Some of the worst policies that have come about for Native People were implemented by people who were doing what they thought was best for the tribes—as a sort of ‘benevolent racism,’ making these decisions for the ‘benefit’ of the tribes without actually inviting them to the table.

Ja:no’s Bowen offered brief comments, explaining that her main reason for pursuing further education at the Harvard Kennedy School was to understand not just the positive, but the negative impacts of education, and how she could use it to advocate for her community, their sovereignty, their language, and their culture:

Education is a powerful tool—you can either use it to empower or to colonize. It can be used to ignite a movement or to placate people.

In light of Women’s History Month, Leah Gazan started off the Q&A by commenting on the ongoing crisis of violence against indigenous women and girls—currently being likened to a genocide in Canada—but said that it’s these same women who are on the front lines fighting for a better life and a better planet.

In response to questions on how to better include indigenous peoples in the interfaith space, panelists pointed to the important connection between certain sacred localities and indigenous rites, encouraging people of other faiths to express solidarity by supporting their protection. They cautioned, however, that many native tribes have had negative experiences with religious institutions in the past—especially those who ran residential schools—and that many people are still trying to work through that trauma.  Comments ended with the emphasis that “colonization is not over”—and that it’s making itself seen through ongoing land disputes, willful human rights violations, and more.

Ganoune Diop concluded the webinar, saying that it had been “a very humbling experience”:

I’ve spent many years studying slavery, but what we’re looking at here is deliberate genocide. The dehumanization of indigenous peoples is connected to a structural and institutional matrix of legitimized domination and violence. It’s a reminder that we have a long way to go. I salute the resiliency of indigenous peoples, and I’m deeply humbled by everything that I’ve heard.