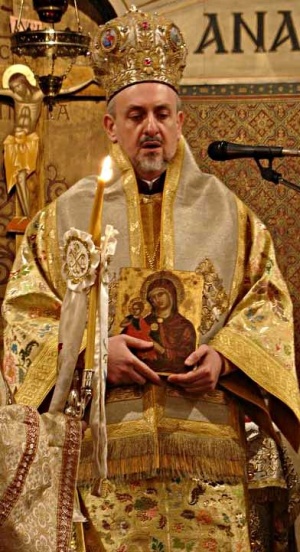 His Eminence, Metropolitan Emmanuel (Adamakis) of France studied Philosophy at the Institut Catholique de Paris, and Theology at the Orthodox Institute of Theology of Saint Serge, as well as courses at the École Pratique des Hautes-Études, and at the Institut Supérieur d’Études OEcuméniques de l’I.C.P. He obtained his Diplôme d’Études Approfondies (DEA) from the University of Sorbonne in Paris, and a Master of Theology (THM) from the Holy Cross Greek Orthodox School of Theology in the United States. He was ordained a deacon and priest in 1985. He served concurrently as Chancellor of the Orthodox Metropolis of Belgium, and as Dean of the Church of the Archangels Michael and Gabriel in Brussels. He was appointed Representative of the Ecumenical Patriarchate to the Church and Society Commission of the Conference of the European Churches (CEC), and in 1995, Director of the Liaison Office of the Orthodox Church to the European Union, a role he still fulfills today. In 1996, he was elected Auxiliary Bishop to the Metropolis of Benelux, under the title of Bishop of Reghion. In 2001, the Ecumenical Patriarchate entrusted him with responsibilities for the International Interreligious Dialogue with the Monotheistic Religions, and in 2003, elected him Metropolitan of the Holy Metropolis of France. Over the past 14 years, as president of the Orthodox Episcopal Assembly in France, Metropolitan Emmanuel has tirelessly encouraged inter-orthodox cooperation. He is Co-President of the Council of Christian Churches of France, as well as Co-President of the World Conference of Religions for Peace (WCRP). He has been a Member of the Central Committee of CEC since 2003. Metropolitan Emmanuel has been named “Chevalier de la Légion d’Honneur” in France, among other Church and State distinctions.