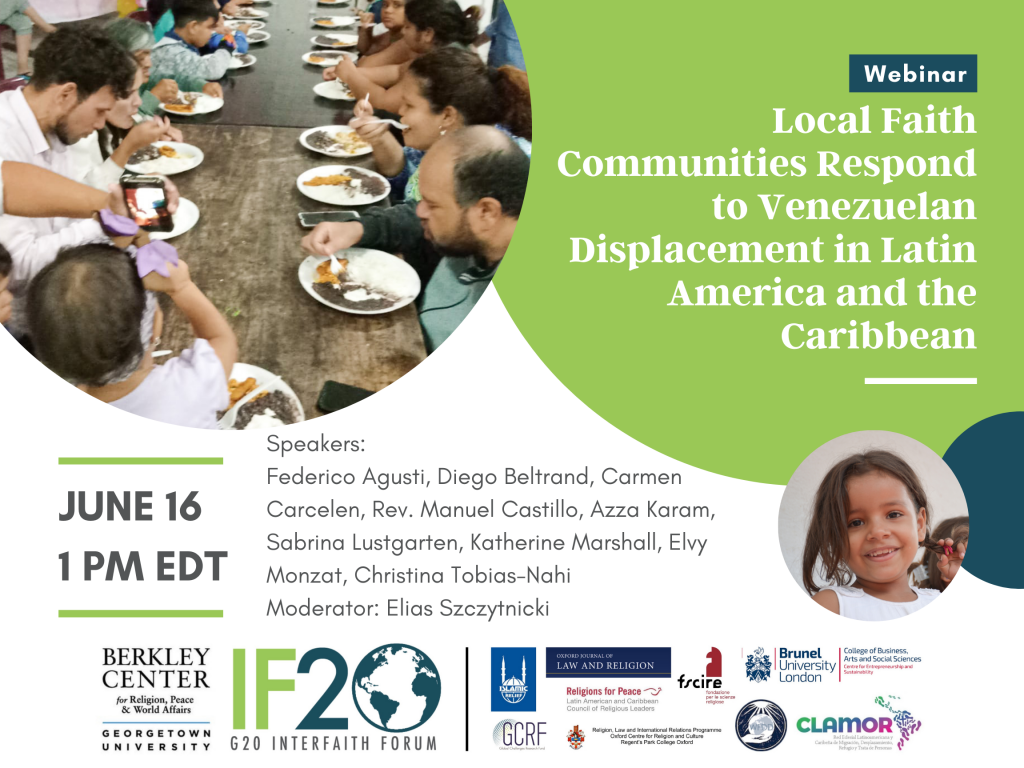 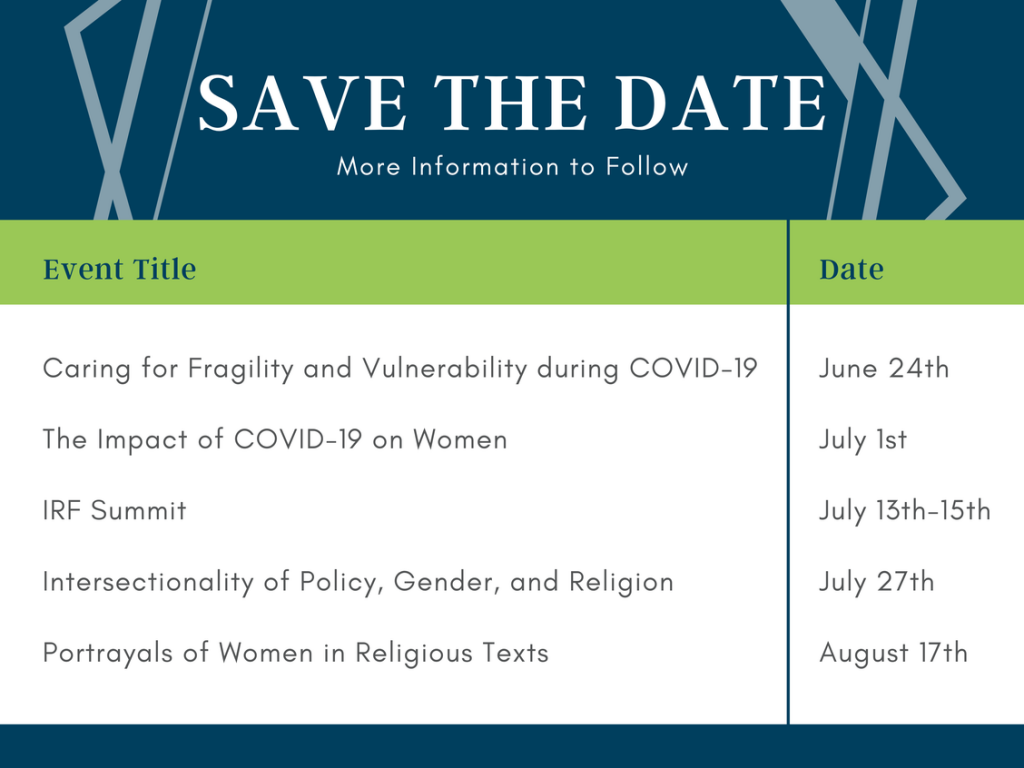 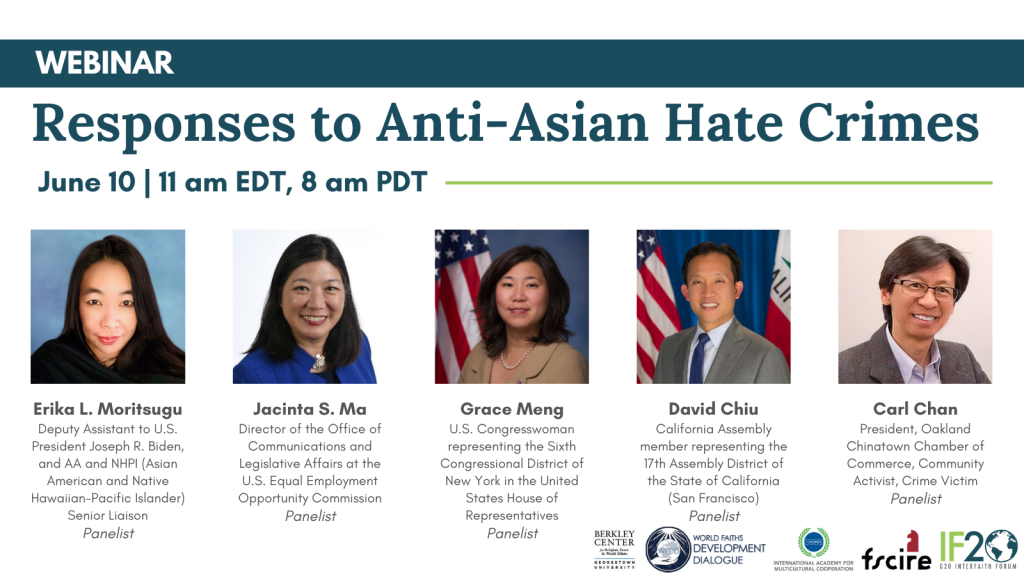 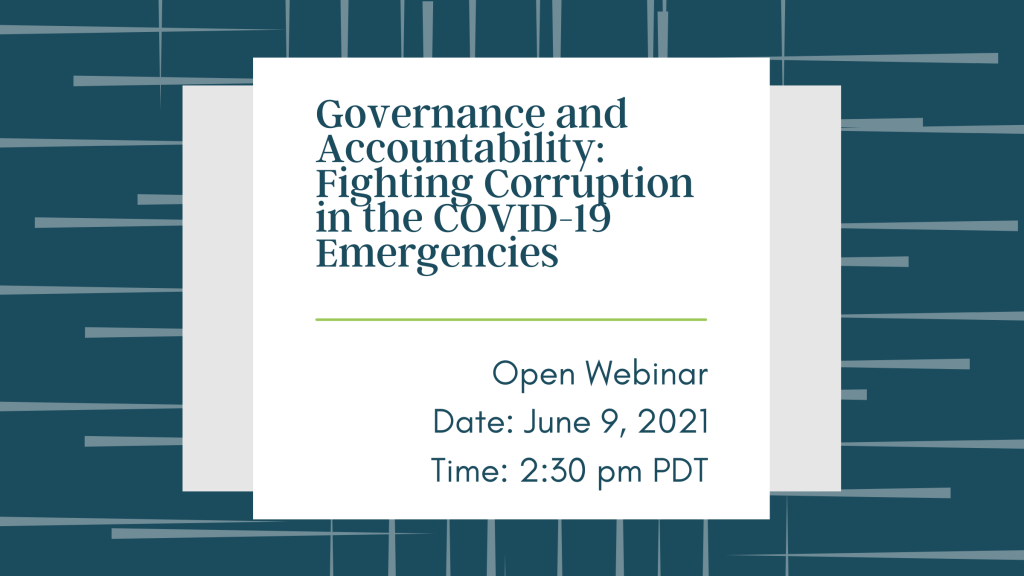 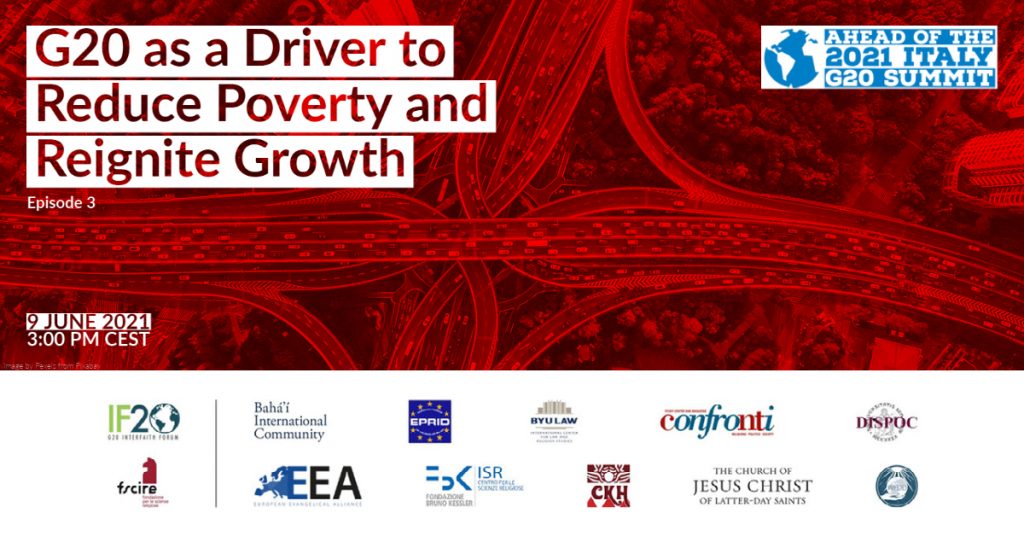 The event focused on how to better utilize the “on the ground” resources and perspectives of faith actors and traditions to assist with addressing global poverty challenges and promote economic recovery in the wake of the COVID-19 emergencies. Leading up to the G20 Summit and G20 Interfaith Forum meetings in Italy this fall, this webinar aimed to offer a keen focus on actions and challenges related to religion and the G20 Italian Presidency’s “Prosperity” section of their 2021 theme. Marshall began the discussion by introducing both the speakers and the issue at hand: “There are great fears that we’re going to lose a lot of the progress that has been made on the SDGs in regard to poverty and development because of the COVID-19 crisis. How much have we lost, and how do we regain it?”

Huq centered her initial comments on Bangladesh’s economic experiences during the pandemic. “For us, the foremost question going into this pandemic was ‘do we have the luxury to afford to be safe?’. The crisis really threw light on the feasibility (or lack thereof) of public health measures as ‘standard global procedures.’ You can’t consistently wash your hands without clean water. You can’t practice social distancing when you’re packed together in a slum. Countries in South Asia dealing with dire poverty were already struggling to begin with, and that added additional layers of concern to the pandemic.” Bangladesh, because it couldn’t afford a lockdown similar to those seen in Northern Europe, absorbed some of the economic shock by not shutting down. However, the slowdown of Bangladesh’s powerhouse—the ready made garment industry—and the decrease in informal job opportunities (relied on by the very poor) brought great losses. Huq said that job redundancies and an increasing learning deficit due to suffering education systems have affected women and girls most harshly:

“When girls are made to sit at home, things like domestic violence and early marriage increase, and that ‘shadow pandemic’ is something we’re going to be left with for years to come.”

Franks focused on the IMF’s three central objectives to help with pandemic recovery: to speed up vaccinations, to provide economic support to households and businesses, and to step up international support for vulnerable countries. In addition to the World Bank’s $50 Billion vaccine initiative proposal, Franks said the IMF is emphasizing that wealthy countries contributing to vaccine distribution is the “single best investment of the century.” “The pandemic will not end for any of us until it ends for all of us.” The IMF’s current efforts include giving financial assistance to over 100 countries and issuing SDRs—the IMF’s special currency to help poorer economies.

Grim presented recent research conducted by his foundation on how religion contributes to fair economic growth. He looked at case studies from the US, China, and India, showing that religious freedom “sets society free to create new economic drivers,” and that companies which encourage faith-based partnerships and religious expression invest more into social equity and justice. “Religious freedom is connected to sustainable growth. Where you have more religious freedom, you have more pillars for social justice, which includes equitable income etc. In countries where religious freedom has declined, economic growth goes down.” In the US, faith adds $1.2 trillion to the economy every year through religious organizations and faith-inspired businesses. In addition, faith-based recovery organizations contribute $316 billion to struggling issues without government aid. In contrast, China’s small allowance toward more religious freedom in the 1980s coincided with blossoming economic growth, but now that they’re shutting that down more, the economy is slowing.

Marshall furthered the discussion by asking each of the speakers to go deeper in their analysis of how religious dimensions and actors factor into these issues, and how that might shape proposals to the G20 leaders.

Religion is an essential part of most people’s everyday lives, and ignoring that reality cripples us in understanding the solutions we’re looking for. The ethical bearing that religions provide to development is extremely important. The G20 should think about mindful processes and mechanisms to build better alliances and partnerships between government and faith.

The IMF and other large organizations deal on a high level and pump money into areas, but rely on governments and grassroots organizations like religions to actually deliver needed services. In addition, the pandemic has exacted a severe psychological and spiritual hit on people, and religion is able to provide support in ways that nothing else can.

Do you have any examples of the complexities of approaching religious freedom in different countries, or how faith might help the economy of somewhere like Brazil?

“Each country has to be approached according to its own situation. We have to be creative in creating messaging that makes sense for the specific location. Religiously-inspired businesses encourage people of faith to follow their callings to help the world—those in poverty, the environment, etc. Letting those passions have an economic outgrowth is something that works really well.” –Dr. Brian Grim

Looking ahead to Indonesia’s G20 leadership in 2022, any specific advice on areas they should focus on?

“Indonesia is very religious. It’s Muslim-majority and Muslim in its ethos and attitudes, but that doesn’t impede Democratic aspirations. As a part of their framing, the question of gender diversity and plurality would be an interesting one that Indonesia would be well-placed to shed some light on.” –Dr. Samia Huq

How is religious extremism affected by economic factors, and how do we address it?

“Religious extremism is a sensitive and highly political issue. The relationship between poverty and religious extremism is not clear-cut. Whatever the level is—poor communities or affluent ones—it’s very important to have good and balanced religious education. There need to be pluralistic, capacious, and even interfaith ways of exploring and coming into our own faiths.” –Dr. Samia Huq

Marshall wrapped up the discussion by asking panelists to look at this year’s upcoming G20 Interfaith Forum and G20 meetings and offer advice on how to get back on a path of growth.

There are two areas worth exploring:

1) Creating better partnerships between those who are flying at 30,000 feet over the issue and those who are working on the ground.

2) Inviting more religious representatives to events like the civil society forum held every year in conjunction with the IMF Spring Meetings.

The G20 Interfaith Forum should take better advantage of the opportunity to invite in business. Religion is more than just clergy, and there are highly religious people out there who are using faith in their corporate decisions to make big economic impacts in the world. In conclusion, Marshall thanked each of the panelists and encouraged the discussions to continue:

“We’ve opened up Pandora’s Box here—looking at a few of the many issues that are contributing to what I call this ‘Kairos Moment’ in history. This pandemic has caused disruption in many areas of policy—including how we think about poverty, social protection, market forces, private forces, etc.—and we need to continue this inter-religious, inter-sectoral, and intra-religious dialogue as we move forward.”