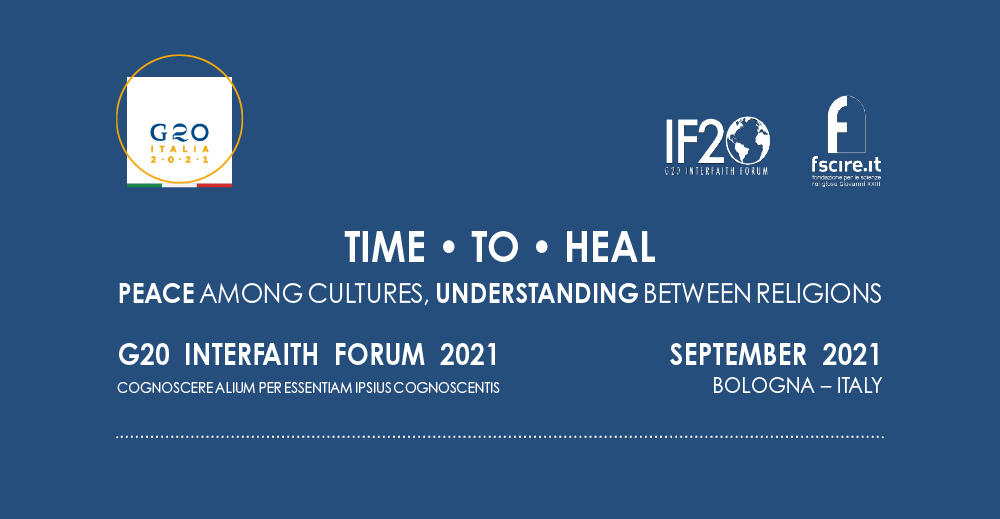 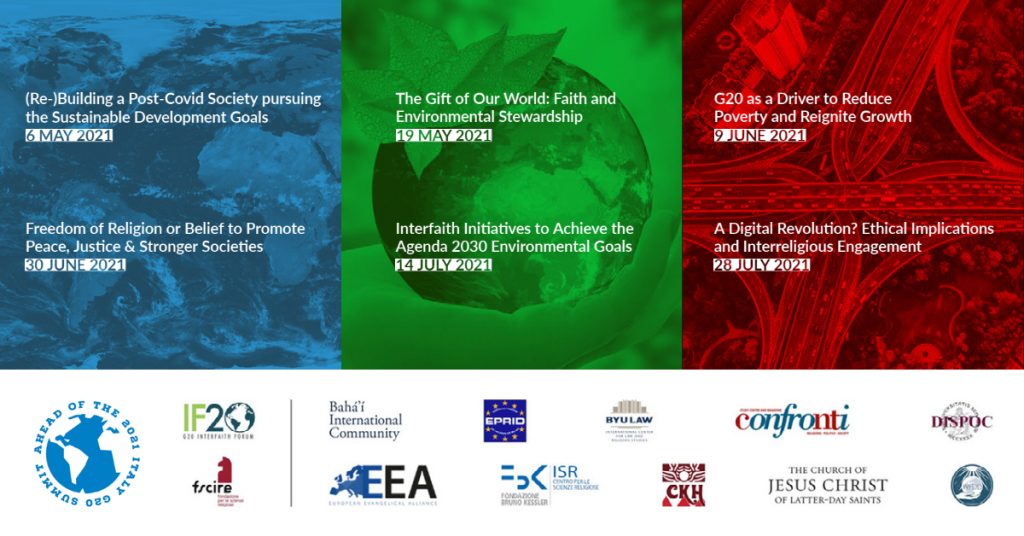 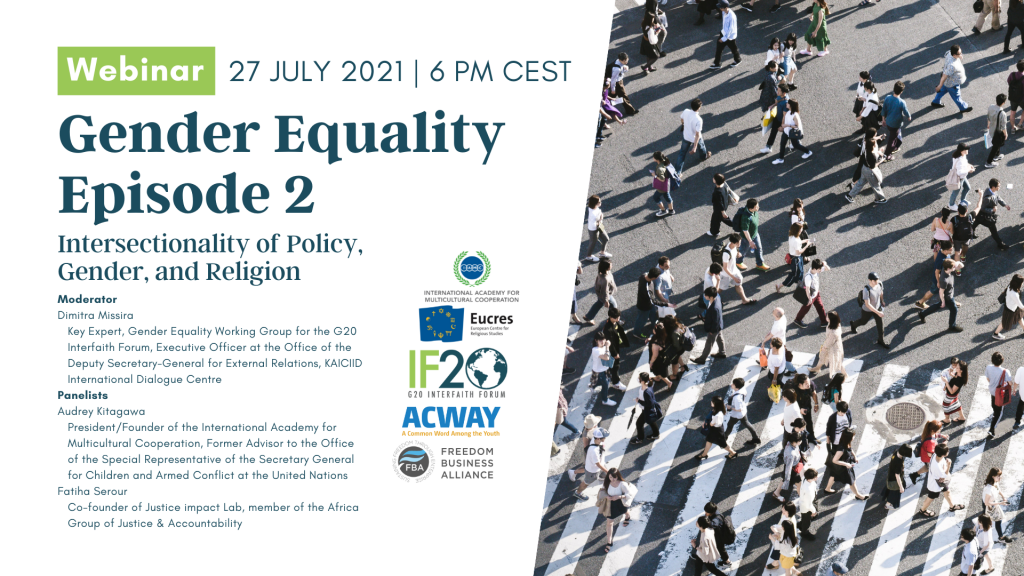 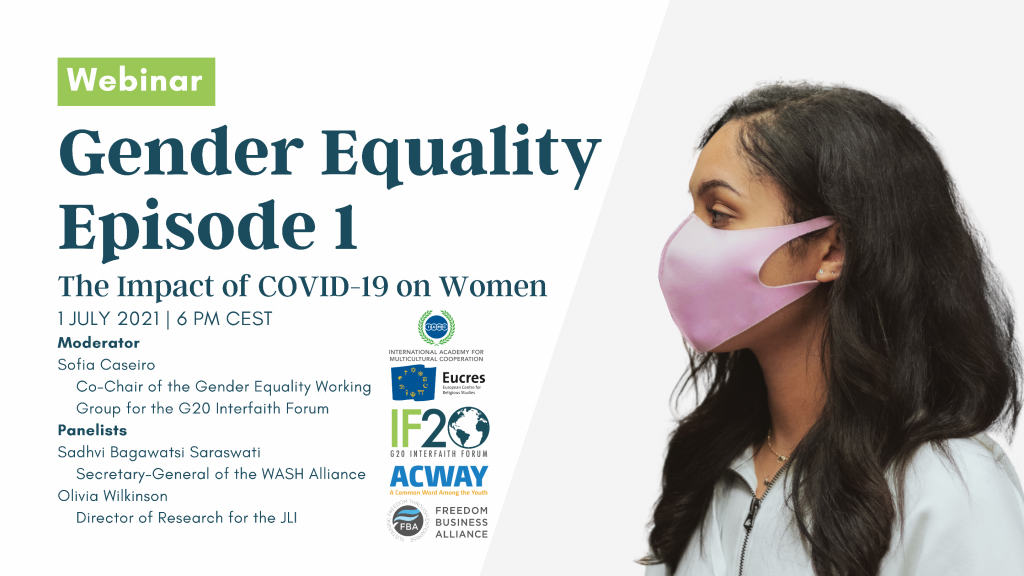 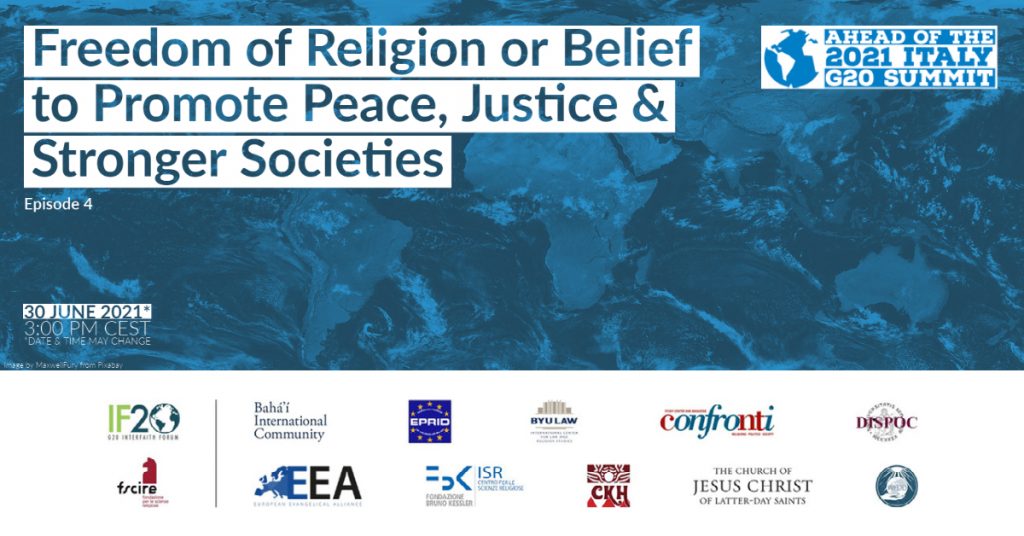 The event was part of a meeting of scholars and practitioners held in Matera, Italy, centered around rule of law and religious freedom in preparation for the G20 Interfaith Forum in Bologna in September (leaders of G20 nations will meet in Italy this November). The Matera discussions focused on Freedom of Religion or Belief (FoRB), and its essential role in building stronger societies and a more peaceful and prosperous world post-pandemic.

Scharffs began the discussion by welcoming all participants to Matera and thanking them for their attendance. The event involved an exchange, with the participants responding to various questions that aimed to frame the conversation.

What important themes have you seen emerge from these conversations in Matera?

Mancini said the Matera discussions had been exceptionally fruitful, but also a challenge, because as scholars they’d been forced to move beyond theory to practical applications and clear objectives. With the aim that the IF20 will become an official engagement group of the G20, she pointed out that scholars have a unique capacity to articulate the voices of religious communities in a way that government leaders and policymakers can trust and understand.

Martinez-Torron focused on two key takeaways he’d like to reinforce to state and national institutions:

Marshall said that the pandemic has tested existing systems and relationships the world over, one test involving relationships between states/public health policies and religious communities. With the suspension of worship services and meetings, such relationships were tested. But it also strengthened them, through the extraordinary responses of faith communities to the social aspects of the crisis—providing food, helping the elderly and vulnerable, etc.

“There’s increasing visibility of the dynamic and diverse roles of religious communities across the global agendas. It doesn’t take much creative thought to visualize how these communities can assist in achieving each and every one of the SDGs.”

How can FoRB positively contribute to what the G20 is trying to accomplish?

“As a lawyer and constitutional law scholar, my first thought goes to the possibility of sustaining a common culture of human rights. Human rights are truly a revolutionary discourse. We don’t think about how profoundly counter-cultural they are. It is key, I think, in this respect, to engage religious communities and make room for minoritarian voices.”

Saperstein commented on religion’s rich history of fighting for the vulnerable—with religious communities having a major presence in every social justice movement. With 85% of the world’s citizens as part of some religious community, every diverse and marginalized group is in the religious community’s pews and meeting houses. Religious actors can help those voices be heard.

“In order to do our work well, though, we have to have the freedom to do it. Three-quarters of the world’s countries provide a decent amount of religious freedom. But a total of 80% of the human population lives in the one-quarter of countries that do not.”

Specifically, how can religious communities contribute to the G20’s most immediate challenges?

Marshall emphasized that the most immediate issue is the challenge of vaccinating the world—as no one is safe until everyone is safe. Religious communities play a vital role, as they not only assist with building trust and vaccinating their individual communities, but also help government leaders look past nationalism to see the needs of the vulnerable in the global community.

With all the misinformation surrounding vaccines, religious leaders are one of the few voices people trust. In addition, the global religious community is historically a champion of the rights of the poor, which is particularly essential now with the dramatic inequity in health care access.

“The issue of people being vaccinated is not a problem but many problems, and there are many facets to address. If we succeed, it’s going to be because the countries of the G20 got this right. That’s the institution that is positioned and poised act on this. And religious actors should be part of the recipe in finding that solution.”

What lessons can be learned from this crisis?

Martinez-Torron emphasized that the lessons from this crisis should enlighten how we handle crises in the future—and that the most important lesson is that of mutual cooperation between states and religious communities. Though the capacity of these communities to provide help and do good is gigantic, religion is often presented by the media as a factor that creates negative problems in society.

He used the analogy of thousands of people visiting a beautiful park and one or two leaving behind trash. Though a ridiculously small percentage of the park’s visitors were irresponsible, the conclusion being drawn was that all the visitors were slobs.

“The Chinese character for ‘crisis’ includes both ‘danger’ and ‘opportunity.’ There’s always been the danger that people will put themselves first and bring about patterns of discrimination that stem from fear. But there is also the opportunity to create a better world and respond to the critical needs of people throughout the world.”

What SDG specifically do you think needs to be emphasized in terms of religion’s role?

“Education—but not just education in schools. We need to teach the values of tolerance and respect in our congregations. Religious literacy and social justice are crucial values that need to be explained, so that people focus on the wellbeing of the entire society.”

“The environment today is one of the most intuitively religious issues that humanity faces. What we own, we own in a trust relationship with God. And that requires sharing what we have with the less fortunate, but also preserving the core of it for generations yet to come. This issue touches every issue the G20 has to deal with, from refugees to economic justice to education. Everything will be devastated if we don’t find a way to control the damage that is being done to the world.”

“We’ve made enormous progress in improving the quality of life of people across the planet, but the issue of inequality and people being left behind is one of the tragedies that has been so starkly highlighted during this crisis. We need to work toward human flourishing, where people can enjoy the glories of what humanity has to offer, in life, in choice, in the arts. We need to look to solutions for poverty and inequality, using both the ancient principles of religious traditions and the modern experience of people on the ground.”

As the webinar ended, several questions from the audience were answered, and Scharffs thanked everyone for their participation and the great work being done in advance of the G20 Interfaith and G20 meetings this fall, which will be highly consequential to solving the problems highlighted by the pandemic.

“We’re not trapped into making the same mistakes we made before, but this time it really counts. And we’re seeing that vividly in this crisis.” -David Saperstein